A while back I uploaded two new recordings to archive.org, but I'm just now getting around to sharing them with you here.  Oops!  If you'd like to download them to your own computer, you can do so here.

The first is an older recording of FP congregational singing in Santa Fe.  The precentor is Nathanael Smith.

The second was sent to me by a blog reader.  This is a recording of Free Presbyterian congregational singing in Glasgow.  I checked with Evelyn, and she confirmed that the precentor is definitely her husband, Rev. Jett Smith.

Enjoy!
Posted by Sharon at 9:10 AM No comments: Links to this post

Back Home Again In Indiana

In July, I flew back to my old home state of Indiana to attend the Reformed Presbyterian International Conference.  It was a six-day conference with about 2100 attendees, mostly RPs of course, but also a few (like myself) from other denominations.  The week was full of public worship services, lectures, classes, psalm singing, and fellowship with friends both old and new.

The conference was an encouraging experience for me.  The lectures and classes were edifying, and I appreciated the opportunity, especially given that I come from a small and fairly isolated congregation, to spend some time with like-minded people outside my usual circle.

I got to see some old friends, some of whom I haven't seen in well over a decade, and to make new friends as well.  I met some Facebook friends, and some who read this blog.  I even met someone who used to be an FP!  I was encouraged, challenged, and comforted by the people that I met, and have enjoyed keeping in touch with several of them.

I especially appreciated the opportunity to spend some time with a few other single women around my own age.  Here's one of them, in the Crown and Covenant bookshop.  I saw a lot of interesting titles in the bookshop, but managed to limit myself to two.  Oh, and I also picked up a copy of the new RP psalter.  I'm tempted to write a review...but probably won't have the time, at least not any time soon. :) 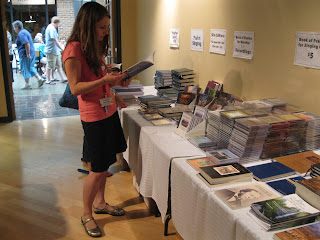 The main speaker was Dr. Beeke.  I heard Dr. Beeke preach often when I was a child, as he was the moderator of the (pastorless) congregation I attended in Kalamazoo; so it was nice to hear him again.  Here are links to recordings of his lectures at the conference, plus outlines.  I really appreciated these lectures, and look forward to listening to them again.
Dr. Beeke's Lectures

One of my favorite experiences of the week was the Scottish Psalter psalm sing.  It was well attended with 150 or so present.  Here's a video of a few of the selections sung.  (Can you see me there in the front row?)

Perhaps you're thinking "It's been a while since you've had a psalm sing there in Texas, hasn't it?" And if so, you're right.  I'm in the process of trying to arrange something.  Hopefully we'll get to do some psalm singing soon!
Posted by Sharon at 1:17 PM No comments: Links to this post

Eggs in bell peppers.  The photo is pretty self-explanatory.  Cut a bell pepper in half and scoop out the seeds.  Crack an egg into each half and sprinkle with salt and pepper.  Bake peppers at 400 degrees till eggs are done--or, grill them. 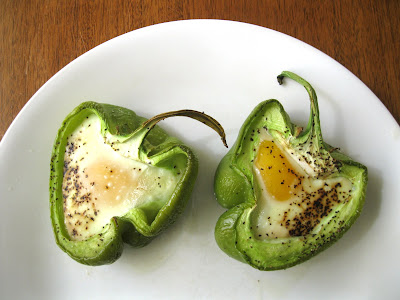 Hopefully next week I'll have a chance to tell y'all about the conference I attended last month. :)
Posted by Sharon at 5:58 PM 2 comments: Links to this post