The night after Mom and Dad got here from Israel, we had a Hembd family dinner; Mark and Mercy came over, and Caleb and Leah, so all five siblings were together for the evening.  We had a nice dinner and a nice evening visiting with one another.

The two littlest babies, Brooklyn and Charlotte, played happily on the floor.  Brooklyn is crawling now, and growing fast.  I commented on how big she was getting, and Leah said wistfully, "Yes, she's not my little newborn any more."  Something in the way she said it made me think, Hmm...

So...I was delighted, but not completely astonished, when I got the news, a week or so later, that Brooklyn is going to be a big sister. :)  Leah is expecting Baby #3 some time next February.  I'm thrilled at the prospect of a new niece or nephew.  And I'm happy for Caleb and Leah, who had to wait four long years for their first baby, but are now blessed with two smart and beautiful children, and are soon to be blessed with another, all being well.

Of course, as you may well know, Caleb and Leah will be leaving us soon, as Caleb is now a student for the ministry of the Free Presbyterian Church of Scotland.  While I am confident that Caleb is well-suited for the task, and happy that the Lord can use him in this way, I am also saddened to think that after two precious years of having all five grown Hembd siblings in one place and in the same church, one of them is leaving us, and taking his lovely wife and children with him.

Of course, if he is to be studying in Scotland over the next few years, then I might as well go visit him, right?  I'm saving my pennies in hopes that I will somehow be able to visit him in Scotland before he completes his studies.  :)
Posted by Sharon at 9:41 AM 1 comment: Links to this post

Seems like I haven't written about my children for a while, so...

Elijah is still a bookworm and still learning by leaps and bounds.  His latest interests center around science, particularly electricity and physics.  The other day at snack time, he set his bowl of popcorn spinning in a circle, pieces flying in every direction.  "Look Mama, centragifagul force!" he said.  Okay, so his pronunciation needs some work. :)  I'm hoping to begin properly homeschooling him this fall, with a schedule and curriculum and all that, if I can ever make up my mind which curriculum to use.  I think the first part of the school year will probably be spent teaching him him to focus and get things done in a timely manner.  He is quite easily distracted!

And...Noah is learning to read!  I haven't done much with him other than the Bob Books

(which I highly recommend), and pointing things out here and there as I think of them.  If he hasn't learned to really read by this fall using my informal "a little of this, a little of that" methods, I plan to go through the book Teach Your Child To Read in 100 Easy Lessons

with him (which I also highly recommend, and which proved useful with Elijah, though he only needed the first 30 lessons or so).  Other than learning to read, Noah has been drawing lots of pictures and writing strings of letters, with real words sprinkled here and there (he laughs and laughs at my attempts to sound out the nonsense he's written).

My favorite part about being a mom to these boys, other than watching them learn, is watching them interact with one another.  There are squabbles, to be sure, but more often I see companionship, and inside jokes, and shared traditions.  I'm glad they're not being sent off to school to be separated from one another for most of the day, as I think spending all of their time together has made them quite close. 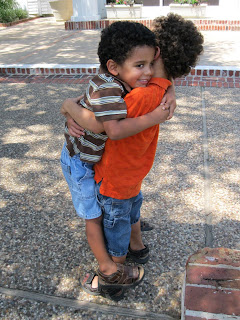 Our "monthly" psalm sings have turned into bi-monthly psalm sings, I'm afraid, or worse. :)  But we're always thankful for the opportunity to sing with our friends, even if we can't do so as often as we like.

I thought the singing at our last psalm sing, on Saturday, was especially nice.  We sang two familiar tunes, Crimond and Evan; and also worked on two less familiar tunes, Farningham and Southwark.  The two newer tunes went over well; everyone seemed to enjoy them.  And I'm happy that I can finally listen to recordings of Psalms 42 and 110.

Here are three of the four recordings.  The fourth--Psalm 133 to Crimond--will be posted later, once Jesh and I have agreed on some edits that need to be made.


As always, you can download these recordings to your own computer from this site:
www.archive.org/bookmarks/snikwad
Posted by Sharon at 11:15 AM 2 comments: Links to this post

Mom and Dad are home on a visit from Israel.  I can't really say that they are "on vacation" because they are both still working hard, Dad on his translation work, and Mom on writing music for the Hebrew psalms.  But it is nice to have them here, and to hear more about Israel and the work they are doing there.

This week has been an unusual one in some ways.  It is comforting to have my parents here at this time.  Besides prayer, there's not much I can do, but to "keep calm and carry on" as the British say.

Carrying on, then: last Monday was Independence Day.

If I were an ambitious blogger, I might tackle a nice controversial topic appropriate to the holiday--for example: is America really a Christian nation?  Or, were the colonists justified in rebelling against the British government?

But I'm not feeling particularly ambitious today, so instead I will post pictures of adorable little children enjoying The Quintessential American Independence Day. 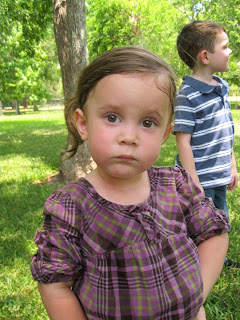 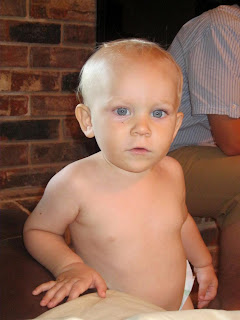 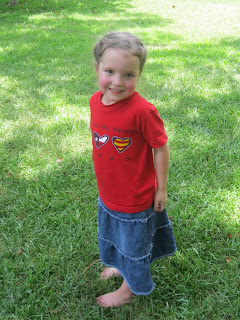 (Adorable, right?)
What is The Quintessential American Independence Day, you ask?  Why, a beautiful sunny day on which you go to a barbecue, of course, and eat hot dogs and hamburgers and watermelon and corn on the cob and brownies on paper plates, and drink sweet tea and coffee, all while sitting in lawn chairs beneath shade trees with friends and relatives of at least three generations, 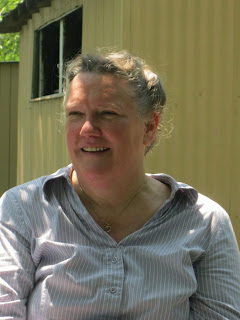 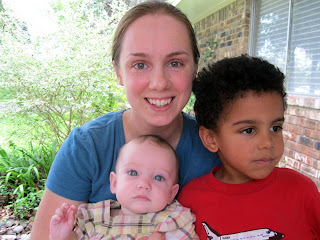 and the children ride trikes and wagons around in the driveway, 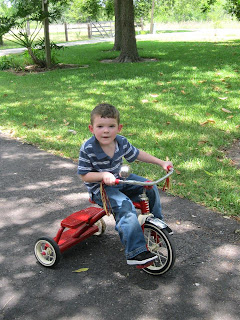 and swing on the tire swing, 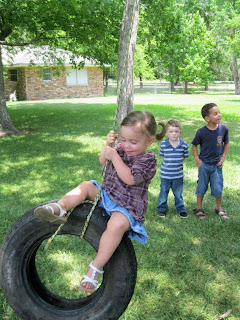 and run laughing through the sprinkler in the sunshine. 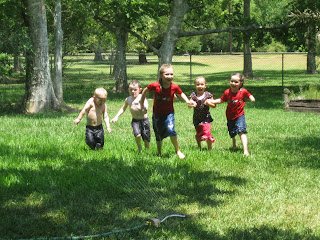 And in the evening (if the kids aren't too tired) you head downtown to hear the free outdoor concert and see the fireworks.  The concert has to include Tchaikovsky's 1812 Overture. Yes, we are fully aware that the 1812 Overture doesn't have anything to do with American independence, but it's an Independence Day tradition anyway, especially when accompanied by live cannons and followed by a fireworks show.

Here's a video of the 1812 Overture.  I had a hard time selecting a video from Youtube, but in the end I went with this one because it had the best cannons.  Elijah reads my blog, and I like to cater to my audience. :) Enjoy!

Posted by Sharon at 10:02 PM No comments: Links to this post