If you don't know my wonderful family, you should. Please feel free to visit at any time; we love visitors. I recently did a series of posts about my parents and siblings. For those of you prevented by distance or circumstances from meeting my family in person, here are some brief introductions:

I'll update these from time to time. Enjoy!
Posted by Sharon at 11:00 AM No comments: Links to this post

Of Spring, and Running

There were herds of them, loping along gracefully, looking lean and trim and not the least bit out of breath. I watched them out of the corner of my eye with a touch--just a touch--of envy. And started formulating running plans in the back of my mind.

Running is a tough topic for me. I love to run, mostly just because (if you run, you know what I'm talking about) but also because it really gives me a lot more energy, and energy is a nice thing to have when you're a mom, especially when you're a mom to two very rambunctious little boys.

But sometimes I feel as though everything is conspiring to prevent me from running. First and foremost, of course, is the fact that I have two children who are obviously too small to be left alone while I head out for a run. When I first moved to Texas, Mom & Dad had not yet left for Israel, so I would get up early and go for a run before the boys woke; if they did wake up while I was gone, Mom was there to keep an eye on them till I got back. Now that Mom's gone, I can't do that.

Theoretically, I could still go for an early run, and let my brother deal with them if they woke. But he is a busy person and would probably not appreciate having them wake him, or interfere with his morning routine; so I would have to go really really early, to be quite sure that I would be back before they wake. But running so early would mean running in the dark, along desolate country roads, with no shoulder to speak of....I could do it, and have done it, but would rather not, you know?

Finally, the other day, it occurred to me that I could run back and forth down the street in front of our house while the boys play in the driveway. This will be incredibly tedious, as one lap back and forth will only be about a tenth of a mile. But at least I can be running.

So the next issue is (guys, feel free to tune out now) what to wear. :) Last summer I was struggling with how to run modestly, experimenting with various options and finally settling upon a pair of loose capris. But now I have discovered that what I thought was a strongly held tradition in our church--women wearing skirts--is actually a rule. A rule that is hard to find, therefore effectively "unwritten." I might as well say that I don't agree with this rule, nor with the idea of a rule being unwritten; but I'm willing to abide by it since when it comes to churches, there isn't another place I'd rather be. :) And one can always hope for change...does that make me sound like a dangerous insurrectionist? But for the time being, at least, this rule creates a new challenge to deal with when it comes to exercise.

Does anyone who read this blog run in a skirt?? Can you help me please? What do you wear and does it really work? How do you find a skirt that's full enough to stretch in yet not so full that it tangles itself around your legs while you run? I've tried a knit skirt (clung to sweaty legs; sorry guys, I warned you to tune out), a smooth polyester skirt (it BOUNCED), a denim skirt (it chafed), a light cotton skirt (wind...'nuf said), and now I'm out of ideas.

I'm a little bit afraid that someone is going to tell me "Well if you can't run decently in a skirt, then you shouldn't be running at all." And since I haven't been running lately, I don't have the energy to combat that hypothetical argument, so I won't. :)
Posted by Sharon at 9:22 PM 9 comments: Links to this post

Yesterday, I sold this postcard (as part of a set) in my Etsy shop. 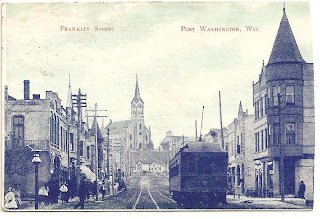 This is how the town of Port Washington, Wisconsin looked about 100 years ago. I love this card. :)

I'm beginning to think that I'm a city girl at heart. I like the compactness and efficiency of town living, which I grew accustomed to while living in Bloomington, Indiana; and I'm growing quite weary of driving twenty minutes or more to get to anything important--church, friends, family, grocery stores, libraries, parks . When I lived in Bloomington, most everything I wanted to do was within two miles; I bought a tank of gas once per month. Here, I burn through a tank of gas in less than a week.

That's not to say that there aren't aspects to rural living that I appreciate--there are; and I'm not so enamored of urban living that I would willingly sacrifice having a yard of my own. My dream home, I guess, would be a beautiful old house (a bungalow, or a foursquare, perhaps) in or near town, with a half-dozen chickens in a coop out back, vegetable plants tucked into every nook and cranny, a porch swing, and a cat sleeping on the windowsill. A big, fat cat.

Something like this urban homestead, maybe, only not quite to that extreme. You have to leave enough grass for the kids to run, you know? And for Elijah to do cartwheels (he just figured out cartwheels a week ago).

That said, if it's possible for a family to support themselves from the land, via a family farm, for instance--I would see that as an even more appealing option, even if it meant sacrificing the conveniences of city life. What better way to "train up a child in the way he should go" than to have your children by your side, assisting with the family business? Of course, in today's economy, that's not often an option.

Where would you live, if you were free to choose? City, suburbs, or country?
Posted by Sharon at 10:09 AM 6 comments: Links to this post

I enjoyed this post by Jasmine Baucham on homeschooling:

"I Realize You're Just Parroting What You've Been Taught."

I don't always agree with everything Jasmine has to say, but on the whole, her blog is a good read--and I'll admit I'm envious of her ability to crank out well-written posts at an impressive rate!

I spent some time in three educational environments--homeschool, a private Christian school, and public school. My experiences might not fit the stereotypes. Homeschool, at least done the way we did it (no hard deadlines), left me with a tendency to procrastinate, though I'd like to think that I've since improved in that area. :) The private Christian school proved, in the long run, to have a very negative influence, due to a prevailing attitude amongst the students that it wasn't "cool" to be too religious (at least, that's how I took it). And I had a relatively positive experience with public school, perhaps because I was quickly welcomed and befriended by some nice Christian girls, and because several of my teachers were openly professing Christians.

But in the end--and I might step on some toes here--I have to say that generally, I think that homeschooling is the ideal choice for serious Christian families, both academically and spiritually, at least through the elementary years. I do think that there are circumstances where homeschooling is not the best choice, which I would go into further if I had more time. But I'm very thankful that I'm able to homeschool my boys, since I know that homeschooling would not be an option for most single parents. Thanks, Mom and Dad. :)
Posted by Sharon at 1:02 PM 4 comments: Links to this post

We went to the ocean the other day...

Me: Look boys, the seagulls are cleaning their feathers with their beaks.
Elijah: Oh yes, they're preening. They squeeze oil from a gland just above their tails.
Me: Oh, right, I knew that.

Credit goes to this book... 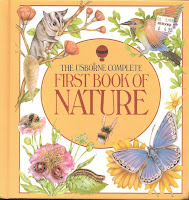 ...the Usborne Complete Book of Nature. I found it at Half Price Books for less than $5, and it has been worth every penny. It is full of interesting information and excellent illustrations. Elijah and Noah both enjoy it quite a bit. It seems to be out of stock at Amazon, but if you have young children and happen across a copy somewhere, I would recommend purchasing it. :)
Posted by Sharon at 7:11 AM 1 comment: Links to this post

It has come to my attention that my boys are no longer babies. Therefore, the blog name "Sharon's Babies" no longer seemed appropriate. Hence, I have moved to this new blog, entitled "Texan Rose." You know, because I live in Texas, and I'm as lovely as a rose. *ahem* or rather, because my middle name is Rose. I like to pretend that using my middle name gives me some degree of anonymity online. Silly, I know.

Anyway, I discovered that I could export my entire old blog to my hard drive and upload it again to my new blog. Convenient, huh? Now I just need to make sure that all my thousands of readers are aware that I've moved. Perhaps a little note on my old blog, with a link, will suffice.

I hope that my Texan readers are surviving this bout of frigid weather (we nearly had a frost last night, and the high temperatures have been in the fifties, oh dear!). And I hope that my readers world-wide are having a wonderful new year.

Wishing you a Happy New Year! 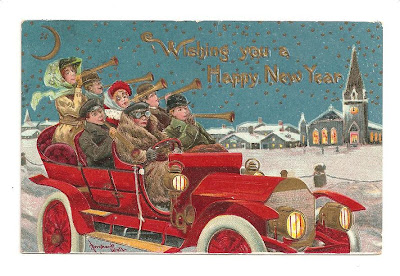 This 102-year-old postcard was once my grandmother's. I love it because it looks so joyous. :) Happy new year to you all!
Posted by Sharon at 7:51 AM No comments: Links to this post