So I (re) discovered Polyvore. You can create outfits by clicking and dragging images...lots of fun. I just put this one together:

This outfit is very "me"--that is, comfy, casual, and well suited to doing the stay-at-home mom thing. You know, lounging around on the couch, watching soap operas, and eating chocolate.

PLEASE NOTE: that was sarcasm.

Of course if you want to buy any of the items you're playing around with on the site, they provide you with helpful links. Though I'm not actually shopping for clothes right now--and I would never spend that much for shoes or a bag anyway (they're $200+ each), plus the yellow shirt wouldn't work because the neck is too low. This was just for fun, and maybe for future shopping inspiration. Actually, I am kind of tempted by that skirt, though--only 17 bucks?
Posted by Sharon at 2:47 PM No comments: Links to this post

A couple of weeks ago, we got snow in Houston. Snow is a rare event here, something we only see once every few years, or so I'm told. We made the most of it, bundling up and heading outside to play. 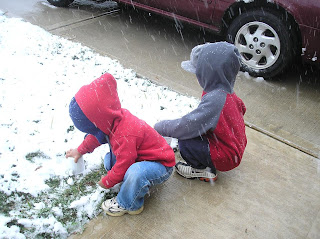 We even built a snowman. 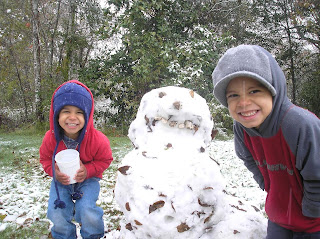 My poor rosebush got a little icy. Incredibly, even after the snow and a couple of frosts, it bloomed again. I think it's finally stopped blooming now, but maybe it will surprise me once more. 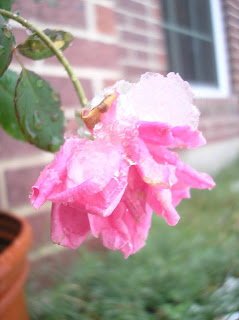 Just for comparison, here's how it looked shortly before Thanksgiving: 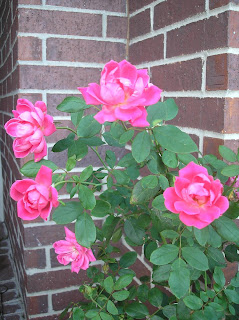 This rosebush is still in the tiny pot it came in. It seems to be so happy there, I'm almost afraid to plant it.
Posted by Sharon at 9:02 AM No comments: Links to this post

Little Boys and Their Clothes

Over the past few days, I experienced my first Scottish communion season. I enjoyed it quite a bit. :) But it was hard to keep the boys in clean church clothes through five consecutive days of church services.

Elijah has three pairs of church pants. At the communion service on Thursday evening, he wore his khaki pants, and got grass stains on both knees. To the Friday morning service, he wore his gray cords, and at lunch afterward, wiped mashed potatoes onto them. Saturday morning, he wore his black pants, and fell into a mud puddle. It was almost funny. Okay, it was funny.

Are all boys this hard on clothes, or just mine? By the Monday evening service, I couldn't find anything clean for Noah, so he wore jeans. I hope no one minded. :) Generally we dress in our best to go to the Lord's house, but I figured that Noah is only two, and it was Monday, and after all, these were special circumstances; so we would make do.

Someday I'll be the sort of organized housekeeper who can make it through a communion season with all children smartly dressed the entire time. And with my shoes polished, and car vacuumed, and purse cleaned out. But I'm not quite there yet. Getting closer, though.
Posted by Sharon at 7:59 AM 4 comments: Links to this post

This is the sort of story that makes me feel all warm and fuzzy inside. :)

A couple of very determined residents transformed their Philadelphia alley from a slum--broken out windows, drug dealers, and all--to Philadelphia's "Most Beautiful Block" of 2009.

Read all about it here.

As I studied political science at Indiana University, I became especially interested in local governments and urban planning, so stories like this are right up my alley (no pun intended).
Posted by Sharon at 10:00 AM No comments: Links to this post

I elected not to have my children vaccinated with the H1N1 vaccine for several reasons, one being that the vaccine had been rushed to market without time for adequate testing. Well what do you know, 800,000 doses of the vaccine are now being recalled because it doesn't hold its potency over time.

A more serious issue: after the recall, there will no longer be single-dose vials available. All remaining H1N1 vaccines come from multiple-dose vials which contain thimerosal. Thimerosal is a preservative which is 49% mercury by weight. Mercury is a poison. I know that the World Health Organization and others claim that vaccines with thimerosal are harmless, but thimoseral is toxic (see the thimerosal safety data sheet from Merck). I'm not willing to have my kids injected with the stuff, sorry.

Anyway, my children may be immune to swine flu already, as they were probably exposed when a friend came down with it a month or two ago. So I'm not stressing. :)
Posted by Sharon at 11:28 AM No comments: Links to this post 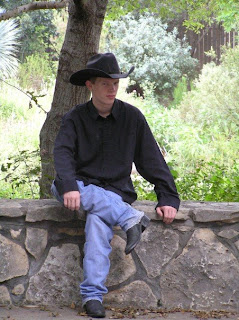 The youngest member of my immediate family: my little brother Ben.

Ben is short for Ebenezer: "Hitherto hath the LORD helped us," 1 Samuel 7:12. I think that Ebenezer is a great name for the youngest child in a large family. :) But I digress. For years Ben was called Joe (short for Josiah, his middle name) but when he reached his teens he decided that he preferred to be Ben. Certain of us objected to the abrupt name change, but as he suddenly became selectively deaf when addressed by the name Joe, we eventually acquiesced.

Ben works in a welding shop on the east side of Houston, helping to build custom railings for million-dollar yachts. As Ben is mechanically inclined, the work suits him, and he seems to enjoy it (though I don't think he enjoys the 45-minute drive to and from work every day). Ben has always had an eye for mechanical things. I remember that when he was small, he would draw intricate illustrations of machines like, for instance, a windmill, complete with all the gears and parts.

Ben was not the easiest child for Mom to homeschool because he wasn't fond of worksheets and assignments. However, he turned out a well-educated young adult just the same, because he soaks up loads of information on his own time. For instance, I often find him reading Wikipedia articles about things that interest him. As a Wikipedia fan myself, I highly approve. :) Not that he cares whether I approve, but anyway... As a result of his extensive reading, Ben often has interesting facts to share about a surprising number of topics, from classical music to current events to cars, etc. etc.

Ben is a talented guitar player, though with his current job, he doesn't have a lot of free time to play. He spends his free time reading, thinking, fixing himself plates of food that always smell very interesting, concocting complicated coffee drinks, doing errands and yard work, etc.

I think Ben has a soft spot for dogs. He has taken all dog-related chores upon himself, and on his days off, he will often take Juneau (our Husky mutt) for long walks of several miles. Ben seems to like those solitary walks. His longest walk to date: 25 miles (though that was actually an accident--he got lost).

Ben's other soft spot, recently, is for babies. His nieces, anyway. He can often be spotted at church holding or talking to Olivia or Shona. They seem to enjoy it. :)

As of last November, Ben is 20 years old! Wow, hard to believe that the baby of the family is out of his teens. And that concludes the series about my family!
Posted by Sharon at 8:34 AM No comments: Links to this post

I know Thanksgiving was a few days ago, but I wanted to post about the things I'm thankful for this year. :)

Aside from the obvious, like the Bible, liberty, food to eat, etc. I'm thankful for the following (in no particular order):

1. I'm thankful that I am well provided for thanks to my wonderful family. How many single moms get to stay home with their children? Not many. I am very blessed to be able to stay with my boys full-time, and to homeschool Elijah.

2. I'm thankful that my boys are in good health. They've both been seriously ill in the past with asthma (Elijah) and croup (Noah), but since we've moved to Texas, we've not had any major issues. Perhaps Texas winters are easier on them, or perhaps they're just outgrowing their respective weaknesses. Whatever the case, I'm thankful.

5. I'm thankful that Noah likes to give and receive great big hugs. :)

6. I'm thankful that I get to live close to my two beautiful nieces.

7. Last but not least, I am thankful to be a part of a good church and community of believers where family worship is practiced regularly. Morning and evening, we gather for prayer, psalm singing, and reading of the Bible. It's especially nice to be able to share it with our friends--to have guests to join us, or to be visiting elsewhere and to hear the words "Can you stay for worship?" Also, I'm thankful that our social gatherings often include psalm singing, in beautiful four-part harmony, no less.

I would upload a picture of my rosebush to share with you, but I can't seem to find my USB cord. I did, however, find Mom's USB cord. Oops...
Posted by Sharon at 9:41 AM 1 comment: Links to this post