A few days ago, the boys and I went strawberry picking with some friends at a nearby farm.  It was a beautiful sunny day, the children were cheerful, and the berries were abundant.  Within a few minutes we had filled our bucket, and I had to go back to the barn for another one.

We came home with two of these... 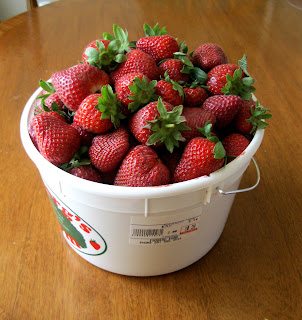 ...a closeup for you.  Aren't they pretty?  It's hard not to feel warm and happy when looking at strawberries... 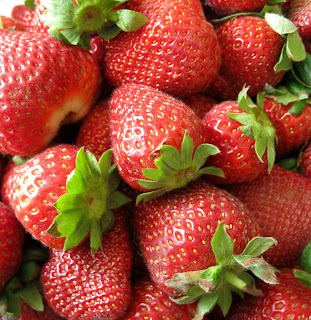 ...and the next morning I made jam. 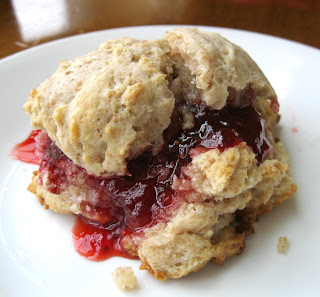 Easy Drop Biscuits
(I used 25% whole wheat flour)
Strawberry Jam
...and, of course, some butter
When Jesh and I were young, we had a summer job picking strawberries.  We weren't picking berries in March, of course--in chilly Michigan, the berries didn't ripen until school was out.  We worked every morning from eight to noon, and earned 25 cents per quart picked--enough to make an eleven- or twelve-year old feel pretty well off. :)
Posted by Sharon at 2:12 PM 1 comment: Links to this post

It's hard to believe that my baby is now four years old.

For his birthday we met up with some other moms and children at a nearby park.  I tried to get some photos but it's hard to get good shots of kids on the move.

Awww, Mama, do I have to stand here for pictures? 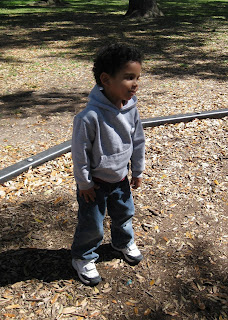 I'd really rather be climbing on the playground equipment.... 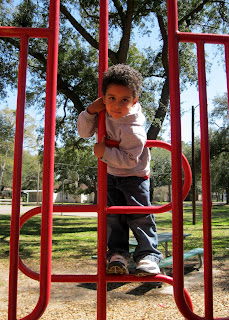 ....or going the wrong way up the slide. 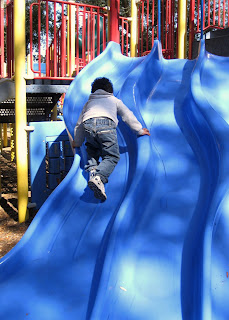 Noah has always been a very cuddly and affectionate child.  While he's still sweet and cuddly, he has really come out of his shell in the last year, spending less time hanging on to my skirts, and more time tagging along with his more sociable older brother.  He especially enjoys spending time with children younger than himself; he is very sweet and protective with them!

If you know Noah, you've met "Chihuahua," his little stuffed chihuahua puppy.  Chihuahua follows Noah everywhere, and it's not uncommon to see Noah "feeding" bites of his own food to Chihuahua at meal time, or putting Chihuahua's paws together when it's time to pray, or taking Chihuahua for a walk on a makeshift leash.

Noah enjoys looking at books and being read to.  He hasn't learned to read yet, though he knows most of the alphabet and letter sounds.  One of these days I'll get around to teaching him to read, if he doesn't figure it out himself first.  He seems to be more of a math person than his very-verbal big brother.  He can add and subtract small sums on his fingers, and numbers/math often find their way into his conversations, especially at lunch time.  He listens and watches attentively as his big brother learns things, and I often wonder just how much he is picking up.  I guess time will tell!

I'm so thankful that I can spend my days at home with my boys, and I look forward to watching Noah grow and learn over the next year.
Posted by Sharon at 8:48 PM No comments: Links to this post

Here is a recent picture of my youngest niece, Charlotte.  She is a very sweet little baby at just over two months old.  Mercy thinks that Charlotte might end up with fair skin and red hair, like her mother.  I'm inclined to think that Mercy might be right.  What do you think? 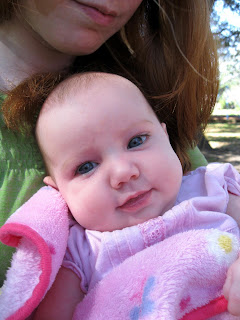 Posted by Sharon at 4:44 PM No comments: Links to this post

Recently, I've been learning a bit about web design, and in the course of my studies I came across a nifty site called Tableizer that creates tables out of data that you copy and paste from spreadsheets.  I soon realized that I could utilize this tool to help create a better layout for the list of psalm recordings I posted a while ago.  So I entered all the data into a spreadsheet (a tedious task), copied and pasted into Tableizer, tweaked the CSS a little, and voila, a somewhat more readable list of psalm recordings.

What do you think?  Easier to read, or not really?  Does it take too long to load?  It loads slowly on my computer, but that might just be my computer.

As I've added to and edited this list of recordings, I've found a few errors.  No doubt others had already noticed. :p  If you find any errors--broken links, incorrect data, etc.--please feel free to point them out to me so that I can make corrections.  Thank you!
Posted by Sharon at 10:32 AM 2 comments: Links to this post